A very good man, Mr. Bob, has passed away.

I just mentioned Mr. Bob in my article a couple of days ago and had a picture of our first trade show exhibit at one of his Mr. Bob’s Let’s Get Connected trade show.

For those of you who haven’t had the pleasure, Mr. Bob Cassells was a force of nature and a founding staple of Barrie’s small business community. He wasn’t everybody’s cup of tea and could come on a bit strong at times but I got to know his true heart of gold and his love for the small business entrepreneur first hand.

I have many stories of Mr. Bob but here’s my first…

I remember moving to Barrie some 11 years or so ago. We didn’t know anybody and we were launching a brand new business venture.

Just before our move to Barrie, we thought it a good idea to go to a Chamber Business After 5 networking meeting. We went. And feeling very self-conscious and unconnected, there we stood trying to look cool and at ease.

And then something miraculous happened…

I saw a curious gentleman come in to the bar where the BA5 was being held and he started at one end of the room and walked the long corridor to the other end of the room. As he walked, the group around and following him grew like a snowball growing as its rolled across the lawn.

Who was this guy?

I tried to get to him but the crowd was too thick and my courage to break through too feeble. But I did see his “Mr. Bob” hat.

That night, Jen and I traveled back home and before going to bed I Googled “Mr. Bob Barrie”.

The next morning, I called him up and recounted my experience from the night before. We met the following day at his house and told him of our plans to move to Barrie and launch our next business. He started to tell me how Barrie was the networking capital of Canada and about his upcoming trade show. He invited me back to Barrie for a meeting.

There I was, sitting on his couch listening to Mr. Bob downloading all the local networking things I could do to launch my new venture. Feeling a bit overwhelmed and remembering the awkwardness of my BA5 adventure, I had to fess up to him…I may be really strong with marketing but there’s a reason for that: I feel much more comfortable creating marketing systems that have people come to me. Going out to people–networking–is not “fun” for me.

He’d have none of it. No excuses!

A short while later, there we were exhibiting at his “Mr. Bob’s Trade Show”.

Now what he hadn’t told me was that a microphone was going to be passed around and everyone was going to do a 30 second infomercial. Aghh! I told him I wasn’t prepared and I’d pass.

He’d have none of that.

He practically dragged me, kicking and screaming, to the microphone. And I did my first infomercial.

Guess what? I survived! In fact, with the mentoring of Mr. Bob, I got to be quite comfortable at networking events. He showed me the tricks of showing up and getting integrated into the scene. Over the years, we traded mentoring advice. I’d tell him about marketing and such. He’d tell me about personal networking.

He was a most generous man. His generosity extended to two of my children, Kelly and Jason, who he invited to also display at his trade shows. I’ve shared a couple of pics and a classic Mr. Bob presentation below. I could share so many more stories…I’m sure they’ll be flying at his Celebration of Life.

I’d love to hear your Mr. Bob stories in the comments below… 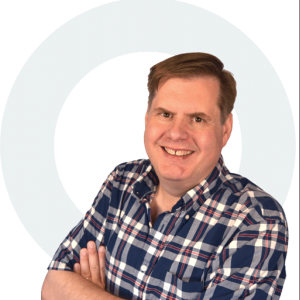